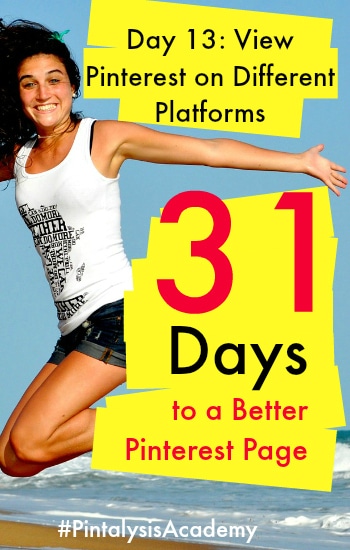 Welcome day to day 13 of the 31 Days to a Better Pinterest Page. Day 13 focuses on the task of viewing your pins across different mobile platforms and the desktop version of Pinterest.

93% of daily usage on Pinterest happens on mobile devices. But within mobile there is the iPad version, the iPhone version, and the Android version. And to an that extra layer of mobile, there’s also the mobile internet version of Pinterest as well.

While it seems that the percentage of people who are using Pinterest on their desktop is decreasing, that doesn’t mean the desktop version isn’t valuable. Keep in mind that there are 60 million monthly active users on Pinterest, and I guarantee that tens of millions of them will use the desktop version from time to time.

What Do Your Pins Look Like On Different Devices

Today’s post is about looking at your pins on multiple devices. Both in the Pinterest feed, and how they look when they’re clicked on.

You may not have all the different devices with you today, but when you do get a chance, borrow a friend’s device and ask if it’s okay to download the Pinterest app on their mobile device. Then take 5-10 minutes to look at the pins on your Pinterest feed, as well as what those pins look like when clicked on.

If possible it’s best to look at Pinterest across iOS, Android and desktop to see the commonalities and differences.

Take the time to really explore how each platform is different from each other. For example, on the iPhone device, when someone lands on your Pinterest profile she’s able to read about your profile, and find out how many followers you have.

However on an Android device, a person must click on the About tab, which many people won’t, so you have to ensure that the boards that Pinterest users do see give a strong idea about what your Pinterest account is about. What your first two boards are about are so critical to new visitors.

This will give you insight on how Pinterest programs pins, especially rich pins, which are quite different across the different platforms. 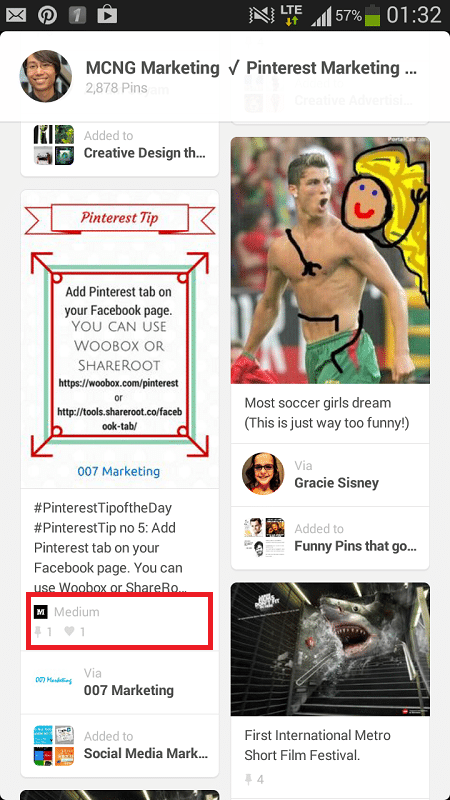 Previews of Descriptions are Much Shorter on Smartphones

One of the main differences you’ll notice when looking at the desktop version of Pinterest and the Pinterest app on smartphone is the character length of descriptions in the Pinterest feed.

In the desktop version, Pinterest shows up to the 500 characters in the pin description. However on the Pinterest app for smartphones, the number of characters displayed are usually between 75-100 for iPhone, and 100-125 for the Android app.

Another issue that’s quite common is that infographics or pins that have fonts that are too small to see on a smartphone,even when the pin is clicked on.

This can be incredibly frustrating for anybody that clicks on a great infographic that wants to read it but can’t.

Today’s action step is to take time to look at your pins and see how they look across a smartphone, a tablet, and the desktop version of Pinterest. What differences do you notice in your pins that could affect business?

I would also suggest that you take the time to play around with the different Pinterest apps and platforms. You’ll find some amazing features that are only available in certain type of platforms.

Is there any differences you notice between the different platforms? Please share it in the comment section.